A Study on Waterborne Illnesses and Water Contamination in Pulinkunnu, Kerala 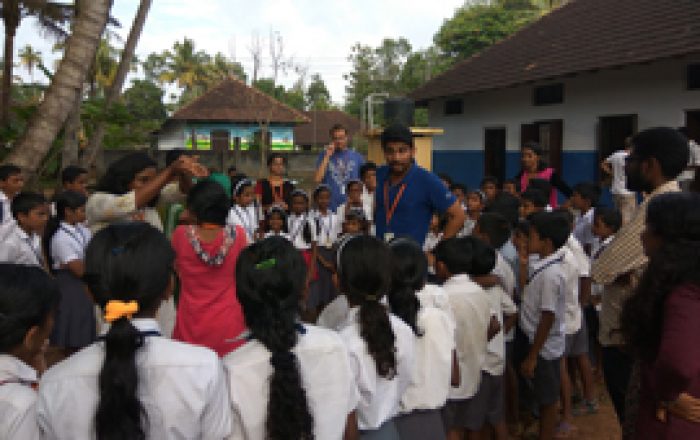 According to WaterAid India, approximately 76 million people in the country lack access to clean drinking water and more than 60,000 children, especially under the age of 5 years, die each year from poor sanitation and diarrheal diseases caused by drinking contaminated water. Causes of water contamination also vary. High population density, chemical farming, overuse of fertilizers, the presence of minerals in the coastal beds, and run-off from factory waste provide limited access to clean drinking water. Other obstacles are distance and cost. Many villagers have to walk several kilometers to access clean water and in some villages, residents are forced to spend money to buy clean water.

The team interviewed villagers and met with village officials to gain a better understanding of the social hierarchy and the key social networks in the village. They subsequently went around the community and conducted household surveys to gain a better understanding of current sources of drinking water and current practices for purifying water. After collecting this data, the team went around the village and made a resource map focusing on water sources and possible sources of contamination. This gave the team a clear picture of the sustainable resources available in the village and helped the team understand the quantity of the resources available. They subsequently had a discussion with the ward member regarding the identified possible sources of contamination.

Next, the team visited the PHC in the community and spoke to the head doctor to gain a better understanding of the current community health status in terms of waterborne illnesses. The interview also included questions about programs and initiatives in place to raise awareness about waterborne illnesses, preventing water contamination, filtering practices, and basic hygiene practices. The also visited a local school and conducted interactive sessions with the students to teach about water contamination and simple water filtration methods. This was followed by a basic yet creative awareness session about waterborne illnesses and how to prevent them. The team also wrote, developed, and performed a skit to school students on the topics of water contamination and waterborne illness. The skit underlined the importance of being aware and creatively introduced Amrita’s Jivamritam water filtration system as a sustainable solution.

The team then worked with community members to form a consumer committee – a group of people who acknowledged the presence of water contamination, are supportive of the proposed solution, and are ready to use the Jivamritam water filtration unit. Lastly, the team worked with villagers to build, install, and co-deploy a modular water filtration system in a previously selected and agreed upon centralized location.

Characterization of Surface and Groundwater During a Natural Disaster

Impact of Seasonal Migration on the Education of Tribal Children

Alcohol Awareness & Self Esteem Program for Children in Tribal Villages