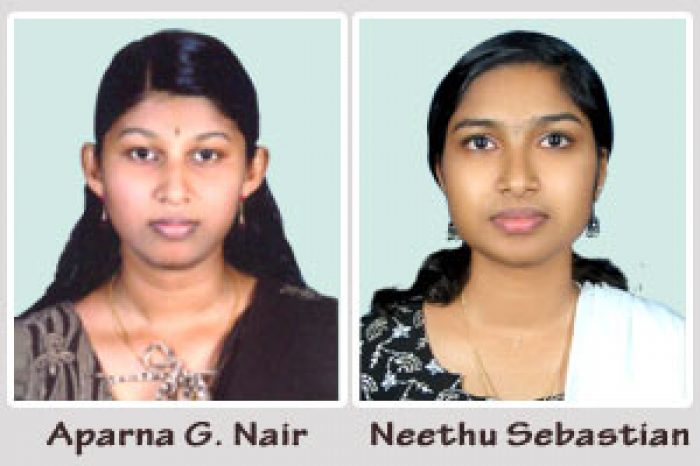 The duo is currently in IIT Bombay conducting research that will constitute their final-year project at Amrita. They began work on the project in January 2012 and will return to Amrita when the internship concludes in June 2012.

While Aparna is working on computational nano magnets, Neethu is conducting a computational study on the role of water in aldol reactions catalyzed by proline.

The two students are carrying out the research work under the guidance of Dr. Gopalan Rajaraman and Dr. Raghavan B Sunoj of Department of Chemistry at IIT Bombay respectively.

“I am assigned the task of conducting theoretical studies on magnetic properties of transition metal complexes mediated through pi-stacking interactions. Pi-stacking refers to the attractive, non covalent interactions between aromatic rings,” explained Aparna.

“Magnetic exchange through pi-stacking interactions is a recent topic of interest, as it finds plenty of applications in the spintronics (spin transport electronics) world and can become a wonderful mechanism of magnetic exchange among the single-chain molecular magnets which is a molecule that shows stable magnetization of purely molecular origin,” she added.

Neethu elaborated on her research work as well.

“Most of the organic reactions are carried out the presence of some catalyst known as organo-catalyst. The rate of chemical reactions is increased by the organo-catalyst. Organo-catalysis offers several advantages, there is no need to use metals thus making a contribution to green chemistry,” she said.

“In my work the catalyst is proline. The efficiency of proline in asymmetric catalysis is largely attributed to its bi-functional characteristics and the presence of a chiral centre. Here I’m trying to find the presence of water in aldol reactions.”

The two students applied for the awards during their third semester. After preliminary screening of applications and personal interviews, the award decisions were made.

Perhaps the fact that during June – July 2011, they completed summer projects in Computational Chemistry and Molecular Modeling at CEN on Amrita’s Coimbatore campus helped the selection committee view their applications favorably.

At CEN, the two students learned more about computational tools of international standards.

“Both Aparna and Neethu fully deserve the award they have received. It is their dedication and hard work and of course, Amma’s blessing that has helped them,” proudly stated Dr. Zeena S. Pillai, Chairperson, Department of Chemistry, Amrita School of Arts and Sciences at Amritapuri.