These remarks were made by Dr. R. Chidambaram, Principal Scientific Advisor to the Government of India, when he recently visited Amrita Vishwa Vidyapeetham.

The country’s top scientist would have surely applauded the simultaneous focus on research, development and deployment had he attended the NanoBio Conference and the NanoSolar Workshop organized by the Amrita Center for Nanosciences this month.

Two products were launched; both were the outcome of research at the Center.

Highlighting the fact that energy generation and storage must go hand-in-hand, Dr. Shantikumar Nair explained, “We make use of a super capacitor and the storage device is integrated with the solar cell. The product can meet the energy requirement of a home and can store energy for up to seven days. It can be most useful in case there are cloudy or rainy days.”

The now-patented concept allows the charging of a laptop or mobile phone, after exposure to the sun for a mere four hours.

A research team of 40 led by Dr. Vinod Gopal developed the product which is expected to be marketed within a year or two.

The second product that was launched will be immediately available for clinical trials. Nano4therapy, a Netherlands-based company will undertake Phase-1 clinical trial in human beings.

The development of this nanophotomedicine for neuroendocrine tumors was led by Dr. Manzoor Koyakkutty of Amrita. Animal studies were conducted in Erasmus University, Netherlands.

“The product can be used to treat brain tumors. When injected into the body of the patient, the drug accumulates in the neuroendocrine tumor. When a low-power laser beam is used, the nanophotoparticles are sensitized and they kill the tumor cells. The nanophotomedicine efficiently removes the tumor with little toxicity,” explained Dr. Shantikumar Nair.

Quoting Chancellor Amma who says that the whole universe is within us but we are searching outside, Swamiji said, “Real research is possible only when you try to find out what is happening within. When you get a tuning with that inner world, research work will become very easy and spontaneous.”

“Respect each and every object of this world. Then you will have invisible connection with everything around. Then intuition will become possible. Intuition is much more important than our intelligence. Many great scientists were able to develop this power of intuition.”

“When we have intuition, our efforts will be useful for the whole world,” he concluded. 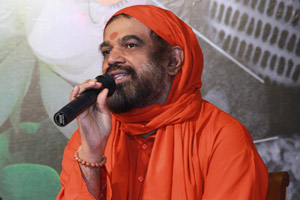