In these modern times, chemists remain busy synthesizing and characterizing novel compounds that can be used for many beneficial purposes.

The project will be ongoing for three years.

Dr. Yamuna received the funding as part of the Fast Track Young Scientists Program of the DST which supports research in emerging areas of science and engineering.

Since the program was initiated in 2000, nearly 600 young scientists have received research grants.

“A literature survey shows that no research study has been undertaken in this area,” shared Dr. Yamuna.

Dicobaloximes, especially the kind that Dr. Yamuna plans to synthesize and study, can find potential use in fuel cells and solar cells. They may also be useful in drug delivery.

Dr. Yamuna explained the technical aspects of her proposed research.

“Cobaloximes are among the best synthetic transition metal complexes known for hydrogen production. They are relatively easy to synthesize and are oxygen tolerant. They are amenable for coupling into natural and artificial photosynthetic systems.”

“There has been continued interest in the synthesis of new organocobaloximes. They are also important due to their photo-induced electron and energy transfer properties.”

“I will be studying the liquid crystalline behavior of a designed series of novel ligand bridged dicobaloxime complexes with different dioximes and various R ligands.”

“In my research work, the complexes containing bridging ligands are of interest since their presence has known to affect the geometry of the complex and properties of the compound. The study of these complexes will help in understanding the electronic interaction in the supramolecules.”

It was the Polish chemist Marie Curie, also the first woman Nobel Laureate, who said that a scientist in the laboratory is not a mere technician. Such a person is also a child confronting natural phenomena that impress as though they were fairy tales.

Surely synthesizing and then studying this new substance will evoke much wonder. We wish Dr. Yamuna all the best in her work! 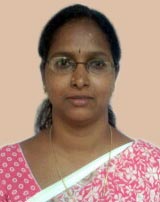