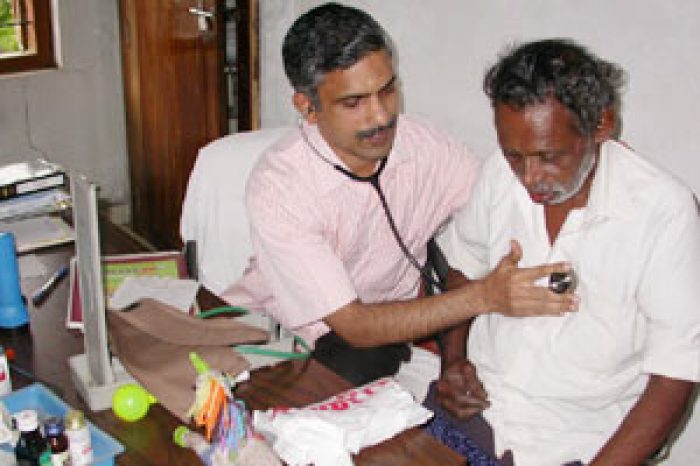 Chancellor Amma often reminds us that compassion to the poor and the needy is our duty to God. It must be her words that inspire the mobile telemedicine team at Amrita’s Health Sciences campus, who regularly organize medical campus in rural and tribal areas. Recently, from September 8-13, 2010, the team organized a series of camps in the tribal area of Kalpetta in Wayanad (Kerala) and the villages of Ramabai Nagar and Holavanahalli near Mysore (Karnataka). The camps provided essential medical services and needed consultations to villagers and tribals, at their very doorsteps.

“We selected areas where the population has minimal access to health facilities, schools, telephone connections and electricity,” stated Mr. Prasanth, the technical facilitator for the camp.

The camps saw the attendance of 430 patients in Kalpetta and 885 patients in Mysore. The majority of the villagers had no knowledge about how to gain access to modern health care facilities.

At Kalpetta, resident doctors Sanjeev Vasudevan and Ajitha Sanjeev were joined by a dermatologist, pediatrician, physician and radiologist from Calicut Medical College. The services of the mobile telemedicine unit were also in attendance.

At Mysore, Swami Vishveshwara Tirtha, head of Pejawar Math, inaugurated the camps. Swamiji expressed his gratitude to Chancellor Amma, for making available such a facility to the poor.

The occasion was also blessed by the presence of Amma’s senior disciple, Swami Amritageetananda Puri.

Dr. Sandeep Sudhakaran, an endocrinologist at Amrita, participated. He elaborated on the camp.

Br. Ramakrishnan is in-charge of the Amrita Kripa Multispecialty Polyclinic at Mysore. The camp at the villages near Mysore was organized in collaboration with this polyclinic.

“In addition to free check-ups, we also had ultrasound scanning, ECG, blood tests, x-ray, excisions and debridements that were performed free of cost,’ he informed. “We also supplied free medicines to the villagers.”

Summed up a joyful, 69-year-old Puttaboramma, a senior resident of Ramabai Nagar, Mysore, “Earlier, we used to travel kilometers to the city to avail the services of a modern hospital. Now we have it at our doorsteps. Many thanks to Amma who has lit the lamp of compassion and given unconditional love to us villagers.”