Ms. C. O. Sreekala, faculty at the School of Biotechnology recently received a best paper award for her paper titled Organic Bulk Heterojunction Solar Cell Based on Rosebengal:ncTiO2 and Parameter Extraction by Simulation at an international conference in Kuala Lumpur in Malaysia.

The international conference ICMENS brought together scientists and research scholars working in the areas of MEMS, nano and smart systems.

“Solar cells today are becoming widely used. Nanotechnology plays an important role in the manufacture of these solar cells,” she explained.

“But understanding and extracting the parameter values of a solar cell in order to measure and decide characteristics such as ideality factor, charge carrier mobility, potential barrier and the charge carrier concentration is always a tiresome task. It requires time, energy and money.”

Working over several months, Sreekala made a simulator with the help of the Amrita Virtual Labs team, which could easily extract parameter values of solar cells.

The work was funded by the Ministry of Human Resources and Development (MHRD). She received support from several colleagues including P. F. Saneesh, K. S. Sreelatha, A. Krishnashree and M. S. Roy, all of whom were also listed as co-authors of the award-winning paper.

Sreekala explained the technical details of her work.

“In bulk heterojunction solar cells, the donor and acceptor materials intimately blend throughout the bulk, so that the excitons generated reach the interface within their lifetime. In this work, Rosebengal (RB) is used as donor and nanocrystalline titanium dioxide (nc TiO2) as the acceptor. Devices with device structure ITO/RB:TiO2/Ag were prepared and their optical and electrical properties were compared at different temperatures.”

“We could make the organic bulk heterojunction device with device structure ITO/RB: TiO2/Ag. The simulator we developed could not only extract the values of ideality factor, charge carrier mobility, potential barrier and charge carrier concentration, but also help analyze similar organic devices by just plotting the dark current characteristics at different temperature and also providing the thickness of the organic layer as input.” 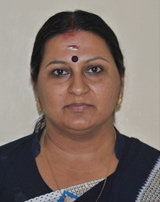