The use of locally available ingredients which are rich in fibre is diminishing in Kerala leading to an upsurge in the number of type 2 diabetes. There exists a myth that consuming parboiled varieties of rice leads to an increase in blood sugar levels. But the nutritional content present in these and its effect on lifestyle diseases has been ignored. To highlight the importance of the readily and locally available ingredients used decades ago in Kerala, a study was conducted to explore its health benefits in patients with type 2 diabetes.

The study was conducted by Nivedita Pavithran, Harish Kumar and MGK Pillai at Amrita Institute of Medical Sciences and Research Centre, Kochi. The authors looked at the improvement in blood sugar, insulin resistance, and cardiovascular parameters such as cholesterol, Apo lipoprotein-B and hs-CRP. The study also analyzed the changes in weight and body composition using dual-energy x-ray absorptiometry(DXA), a gold standard technique for measuring the truncal fat mass, lean mass and bone mineral content.

The recipes prepared in the intervention group included Palakkadan Matta or rosematta rice which is low in glycemic index and considered as one of the healthiest Indian rice varieties and is rich in magnesium, vitamin A and B.    The study showed marked reduction in fasting and postprandial blood sugar and brought about a significant reduction in HbA1c by 0.93%. This reduction was similar to a weight reducing drug therapy.

The study also showed that the LGI preparations of Kerala cuisine had a significant impact on glycemic control and weight loss in the sampled population. The recipes, which are high in fiber, promote greater satiety by prolonging the distension of the gastrointestinal tract, causing increased and prolonged secretion of the gut peptides cholecystokinin, ghrelin, glucagons, glucagons-like-peptid-1, and glucose-dependent insulinotropic polypeptide, all of which have been suggested as potential satiety factors compared to other cuisine.   The intervention with the locally available ingredients brought about a weight loss of 1.87kg which has shown to have a significant impact on cardiovascular risk factors.

In this study, intervention with the recipes of Kerala cuisine showed a significant reduction in the inflammatory markers of cardiovascular disease such as hs-CRP, ApoB and HOMA-IR. hs-CRP is a clinical marker of low grade inflammation which may underlie an increased CV risk known as residual inflammatory index, recently described for patients with type 2 diabetes.

Residual Inflammatory Risk (RIR) is defined as persistent circulating levels of hs-CRP > 2mg/L despite an optimal (<70 mg/dL) control of LDL cholesterol and represents high risk for atherosclerosis. Our study showed a significant reduction in hs-CRP from 3.3 to 1.4 mg/dL indicating a reduction in RIR, and this reduction can prevent coronary atherosclerosis.

ApoB levels are associated with increased coronary artery disease, and in the Amrita study we observed a significant reduction in the levels.

Insulin resistance, as evaluated by HOMA-IR, is considered to be a good predictor for CVD. The HOMA-IR levels reduced from 11.62 to 5.10 indicating improvement in the insulin sensitivity.

The recipes, prepared with locally available and traditionally used ingredients such as red rice, whole wheat flour and broken wheat, provided greater satiety in the subjects due to high fibre content. The inclusion of readily and locally available grains was an advantage for better compliance among the local population. Incorporation of unfamiliar foods in any intervention study would likely lead to poor adherence and compliance. The study was able to corroborate that avoiding rice for a diabetic individual was a myth from the results obtained.

This was the first such study from India and highlighted the following aspects: 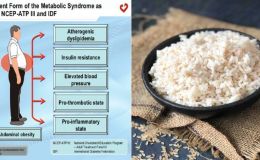